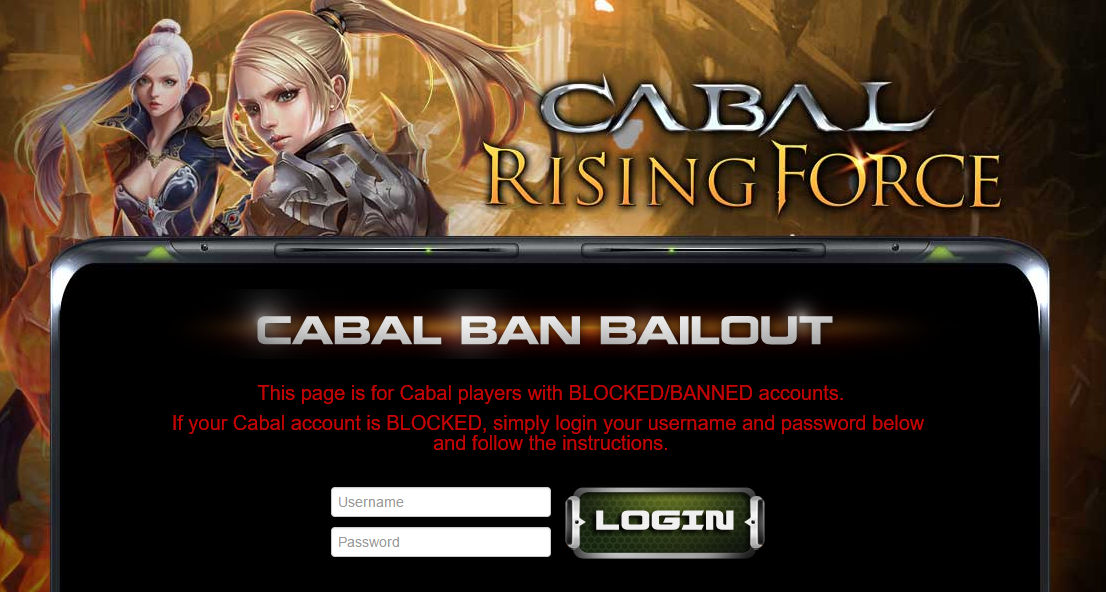 As a game publisher of CABAL Online, Playpark PH advocates a fair game – free from cheats, hacks, and third-party program. This is the reason why we are regularly conducting in-game patrols and encouraging players to report cheaters to penalize users who are guilty of violating our game policies.

In our efforts to make the community vibrant and intact, we are giving players a second chance to change their ways, thus we open the Cabal Bail Out System.

Players whose game accounts have been blocked/banned due to violating game policies may reclaim their accounts only by paying the penalty through the bail out system.

BAIL OUT PENALTY AND CORRESPONDING FINE

Q: What is the objective of the project bail out?

A: This is to promote fair-play and keep CABAL’s community intact. It is every player’s right to change and have a fair and equal community.

Q: Why do we suspend players?

A: These players violated Playpark and CABAL’s game policies and code of conduct.

Q: Why do we need to implement Bail Out system for Cabal?

A: Since we still believe that a real CABAL gamer should be honorable and in our effort to keep the community intact and alive, this is one of those hard decisions and actions we need to do. Also, due to the negative effects of pursuing all violators in a massive scale, we are giving a chance to players to somehow change and still enjoy the game and the community that we are trying to shape now.

Q: Who can avail bail out?

A: Not everyone is eligible for bail out. The CABAL team will not allow bail-out to users guilty of account theft, item theft, involvement in RMT and TPP promotions, event disruption, and other offenses which are deemed to be grave (ex. usage of TPP during an event, GM impersonation, conspiracy, and disruption of an on-ground event).

Q: How much is the fine?

A: It is not all about the monetary value but this is a way to prove to the community how serious we take this matter in our attempt to clean the community. Setting the bail too low, will only give players the impression that it is OK to violate game rules and policies. While setting the bail too high, will limit players chance to change and will give you the impression that we are after the player’s money. As we have said, our goal is to keep the community INTACT and possible elimination of violators.

Q: How sure you have blocked/suspended the right person?

A: The game developer, ESTsoft, has already provided a way to track all third-party program usage and hack users. The system has been thoroughly tested and provided us superb accurate results. The system is now a full proof system.

Q: If I get suspended, how long will my account be blocked?

Q: Can I be suspended again after bail out?

A: Yes, if you are one of those players still taking advantage of the game and other players. Our eyes are on you!

Q: Is there a degree of offenses for each account?

A: None. Every account will be sanctioned accordingly across the board.

Q: Is the Bail Out system permanent?

A: Yes, this time around we open the Bailout System permanently as requested by users.

Q: Is there an item wipe before releasing an account?

A: Yes. If the banned character has a trace that proves his/her items came from illegal acts we have to confiscate it. This is a case to case basis since not all banned accounts are Third Party Program users.

Q: Are the edited characters included in bailout?

Q: Is account suspension the only way to prevent users from using hacks and third-party programs?

A: This is only one of the many plans that we will implement in CABAL. There will be more programs to be introduced to track down game offenders.