Warning: "continue" targeting switch is equivalent to "break". Did you mean to use "continue 2"? in /home/ppwebteam/public_html/cabalph/main/wp-includes/pomo/plural-forms.php on line 210
 Support | Cabal Online Philippines

Ticket Guide for ID has been Blocked

If you cannot open your account and is showing an ‘ID has been blocked” error message, please follow instructions below. 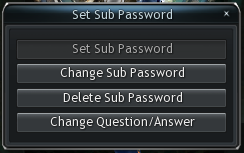 [Where to] Buy Playpark or Level Up Load/E-Pins

Looking for retailers where you can buy Level Up! Load and E-Pins? Check out the list of stores below 🙂

HOW TO BUY LEVEL UP! LOAD IN 7-Eleven CLIQQ MACHINE

HOW TO BUY LEVEL UP! LOAD IN CEBUANA LHUILLIER

HOW TO BUY LEVEL UP! LOAD IN GAMEX WEBSITE

HOW TO BUY LEVEL UP! LOAD IN GAMER WEBSITE

[How to] Add Cabal Files in the Exclusion List of Antivirus

Depending on your antivirus settings, it may repeatedly scan and block the game guard and game files every time you open the game, which will often result to files getting corrupted or files not being patched properly. Adding it to exemption list will exclude the files from being scanned.

Adding the Cabal Online files/folder in the exclusion list of your computer’s antivirus can help prevent and fix the following errors:

The most important things you need to know about the new Mission War are here!

Welcome sa another edition ng aking Ultimate Guide series! This time, I’ll walk you through the most important things you need to know about the new Arcane Trace Battle System so you can prepare for it and you know how to play it kapag nagpatch na ang Episode 9 this Oct 23. I will cover only the basics, so you can still explore the new Nation War system and develop your own techniques, strategy and tactics. Alright!

The Arcane Trace Boss Battle is similar to the Tierra Gloriosa nation war in terms of conquering bases – you need to kill the guardian to conquer a fortress (or a base). The more fortresses you conquer, the higher your chance of winning the battle.

In the end, ang goal nang both nation is to conquer fortresses and defeat the Arcane Golem of Rage to get a chance to acquire the new Unbinding Stones and the +8 accessories (at saka maraming-maraming Upgrade Cores!).

Additional Info: you can enter the map anytime of the day, but the guardians and the arcane golems will not appear until the scheduled time.

2= Indicates the time remaining for the current turn

4 = System messages appear when a fortress is occupied, there is a change in turn, or when a bonus time is given

Number besides the nation logo indicates the number of fortresses occupied by the nation.

Yellow bar indicates the HP of the Arcane Golem of Rage.

The Arcane Trace-exclusive buffs are placed on the top right portion of the screen, besides the map.

(1)             Fortress Occupation Turn: You can attack Guardians to occupy fortresses  but you cannot attack the Arcane Golem of Rage

Like in TG, the guardian gets converted to the nation which defeats it.

(2)            Golem Attack Turn: the nation with the most number of fortresses occupied during the fortress occupation turn will have the permission to attack the Golem. Members of the opposite nation cannot attack fortress guardians, Arcane Golems or the Arcane Golem of Rage during this turn (although pwede silang atakihin ng mga small Arcane Golems)

Both nations have no occupied fortresses (as indicated by the 0s beside the nation icons). The Arcane Golem of Rage hasn’t spawned yet (empty HP Bar).

The first Golem Attack turn is given to the nation which has occupied more fortresses during Turn1.

Like running Maquinas Outpost, bonus time will be given under two conditions:

The bonus time will be given when the original 2-minute time ends.

Regardless of how many Bonus Time was given, the over-all time will still be consumed, thus ensuring that the boss battle will not exceed the 40-minute limit.

You cannot use the Saint’s Force Buff during Arcane Trace Boss battle.

The other monsters inside Arcane Trace may also drop items. You can download the full drop list of Arcane Trace here.

And that ends my guide to the Arcane Trace Battle system.

Maraming salamat po sa pagbasa sa aking guide and I hope you learned a lot from it. If you have comments or questions, you may post here: http://forums.cabal.com.ph/index.php?showtopic=22589

See you in Arcane Trace!

Visit www.cabal.com.ph/episode9 for info on Episode 9.